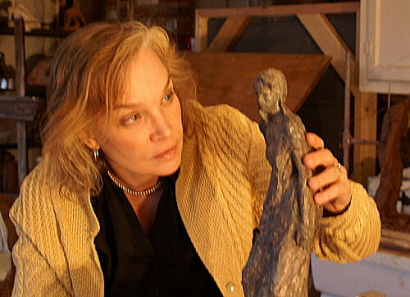 2007, Swenholt inspects patina on a cast of Waiting for the First Stone.

Karen Swenholt is a figurative sculptor who lives and works in Northern Virginia.  After attending MICA and California College of the Arts, she continued her studies at various studio schools including New York City’s New York Studio School, under Bruce Gagnier, Virginia’s Art League, and the Art League.

Influences from the West Coast Bay Area figurative movement combined with the emotional power of abstract expressionism from her East Coast origins form the foundation of Swenholt’s work. The rough painterly surfaces of her sculptures contrast with their grace. She is particularly effective at depicting the human face along with gesture to convey emotion and movement.

Karen Swenholt is currently Artist in Residence at Convergence in Alexandria, Virginia where her large scale sculptures are on view in their Sculpture Garden.  She served as Artist in Residence at Washington Shakespeare Company from 2002-2011 and at Wesley Theological Seminary throughout 2010.  Her work can be found in many public and private collections including the home of Bono (U2), The Vladmir Romanov Palace in St. Petersburg, Russia and public institutions including Cairn University in Philadelphia, Wesley Theological Seminary and other public institutions across the United States.

For updates on exhibitions and developing work, please visit Karen's personal Artpage at www.facebook.com/karenswenholtart/.  she can be reached directly by using the contact link under the Information pages.